Sea Shepherd Australia volunteers conducted a remote cleanup and microplastic survey on Queensland’s Moreton Island between July 16 – 22 to find out just how contaminated with plastic this remote coastal area is.

The aims of the cleanup and microplastic survey were:

According to the Queensland Government, Moreton Island is one of the least polluted and least disturbed coastal environments along the Queensland – New South Wales coast, yet there continues to be an increasing number of marine wildlife found entangled in marine debris.

In 2018, two green turtles drowned after becoming entangled in rubbish at Moreton Bay, the stretch of ocean between Brisbane and Moreton Island. Green sea turtles are listed by the International Union for Conservation of Nature (IUCN) as endangered, with a decreasing population due to fishing gear entanglement and loss of habitat.

Local resort Tangalooma has also reported an increasing number of dolphins found on the island with discarded fishing debris entangled in their jaws around the Moreton Island coast.

Campaign Leader Rebecca Griffiths said, “In addition to turtles and dolphins, this area is also home to a large population of dugongs, many seabird species, and humpback whales migrate past here in the winter months.”

“We will remove as much deadly marine debris as possible to save the precious wildlife of Moreton Island.”

Marine debris is a globally recognised environmental issue as marine wildlife are increasingly affected by human-made refuse, much of which is plastic. This year, there has been an alarming trend of whales washed ashore with stomachs full of plastic.

“Sea Shepherd is known to be on the front line of conservation and this remote marine debris campaign at Moreton Island is no different,” said Marine Debris Campaign Coordinator Marina Hansen.

“Our oceans are being inundated with plastic and the impacts on our precious marine life are increasing at an alarming rate, we need to tackle the scourge head-on before it’s too late.”

Sea Shepherd Australia’s remote cleanup at Moreton Island has been generously funded by a 2019 Team Grant from Santos Organics.

For more info about our Marine Debris campaign click here

We are awaiting more information about 2019’s cleanup and will update you as we have more statistics.

In response to escalating weed infestations across Moreton island, an enthusiastic team of Griffith University student volunteers from Master of Environment and Master of Urban and Environmental Planning, camped out at Comboyuro Point on the slightly wet weekend of 30th-1st April, 2019. This was the fifth return to Bulwer since initiation of the weed management program in 2017. Students participated in a range of volunteer activities as a contribution towards their professional development portfolio.

As part of the field work we completed on Moreton Island, we completed a number of hours of volunteering involving removal of prickly pear from around the Tangalooma airstrip. This was a brilliant opportunity to help with controlling a significant noxious weed in Queensland, and ensuring it does not damage the fragile ecosystems on Moreton Island. What was probably the most valuable element of the experience, however, was being able to work alongside our classmates and teaching staff, and get to know them better through the process. This was particularly valuable considering most of our classmates are international students and so being able to spend time over on Moreton together. It was also fantastic to be able to participate in the field work because practical, hands-on learning is certainly extremely important in terms of solidifying the theory covered in our lectures. And being able to do so while experiencing and ensuring that Moreton Island remains a beautiful and healthy part of South East Queensland only adds value to this.

Thanks to continuing weed management efforts, re-establishment of the highly invasive Asparagus fern has been successfully prevented within the vacant state land, near Castaways in Bulwer, allowing our team to easily dig out juvenile specimens and begin revegetation. The team worked tirelessly to plant over 150 specimens of native flora which were kindly provided by the North Point nursery. This was a great opportunity for international students to get exposure to some important native species that contribute to the complex and fragile ecology of Moreton Island National Park. Students found this activity enjoyable and rewarding, having the opportunity to participate in the first stages of revegetation and help promote the natural aesthetic of the township.

Between weeding and revegetation, a leisurely beach litter pick-up activity from the campground to Bulwer helped students unwind and relax. The team collected various netting, plastic bottles and discarded camping equipment amongst the dunes, to be used as data collection towards an honours research project. 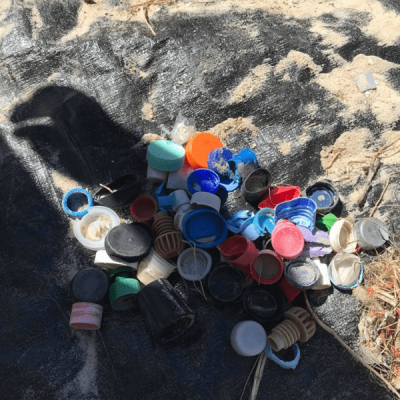 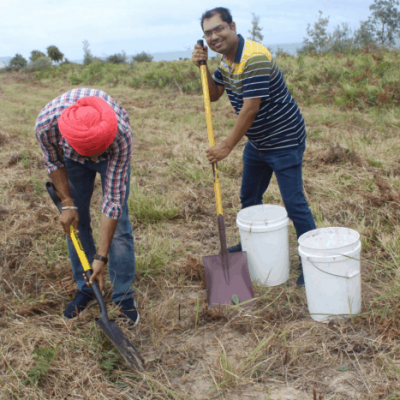 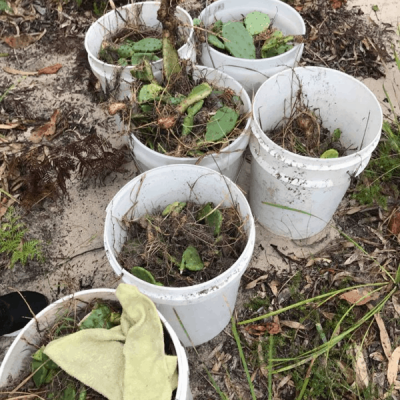 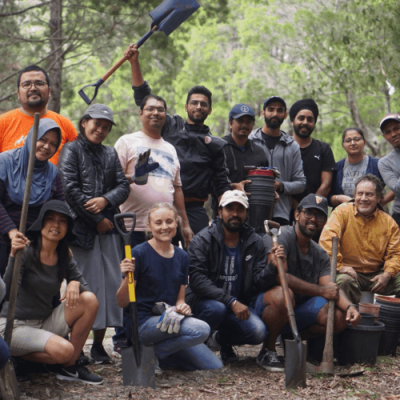 Welcoming in 2022 with the Micat and a bit of spra